Voice of the Beehive formed in London in 1987 by sisters Tracey Bryn and Melissa Brooke Belland. Bryn had gone to London on vacation, and was so enchanted with the experience she decided to stay. She was soon joined by Belland, and the pair began singing locally, reportedly picking up the name the "Beehive Girls" due to their hairstyles. They soon became friends with members of different groups on the local music scene, including Bill Drummond of the KLF, for whom they recorded backing vocals on an 1987 album, as well as an unlikely alliance with Zodiac Mindwarp & The Love Reaction.

In a serendipitous turn of events, a demo of Tracey and Melissa's happened to be at the end of a tape submitted by Tracey's boyfriend to the independent label Food Records. This led to an offer to record a one-off single. Tracey (guitar and vocals) and Melissa (vocals) were joined on the single by Mike Jones (guitar), Mark Bedford (bass), and Daniel "Woody" Woodgate (drums), the latter two previously with Madness. In one of the greatest examples of media manipulation since the Jesus & Mary Chain, the band generated the myth that they took their name from an old Bette Davis film, though in reality there is no such film.

For their first single the band chose to record "Just A City" B/W "I Walk The Earth," released by Food in March of 1987. London Records wasted no time in signing the band, releasing a new version of the "Just A City" single only a month later, including an unexpected cover of Led Zeppelin's "D'yer Mak'er." The band soon had an opportunity to participate in a two-volume compilation on EMI, contributing live versions of the songs "Sorrow Floats" to the On The Dotted Line (Here) compilation, and "What You Have Is Enough" to the On The Dotted Line (There) compilation.

Despite the momentum the band was building, Bedford chose to leave the group to form Butterfield 8, and was replaced on bass by Martin Brett.

Though the group was based in the UK, they quickly became favorites on Los Angeles radio station KROQ, championed in particular by influential DJ Rodney Bingenheimer. The band's reputation began to grow through airplay of the singles, and even album tracks such as the sublime "There's A Barbarian In The Back Of My Car" began to get radio exposure. 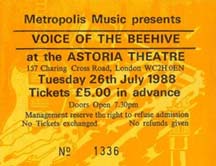 Winter of 1988 saw the release of the "Sugar Sugar" single by The Bomb Party, featuring guest vocals by Melissa and Tracey on the title track and the B-side ""Do The Right Thing."

Realizing the commercial potential of the band, London issued new versions of two previously released singles in multiple formats. "I Say Nothing" was released as a 7", limited 7", honeycomb sleeve 7", 12", limited 12", and CD single. "I Walk The Earth" got a similar treatment, released as a 7", limited 7", double 7", clear vinyl 10", 12", and CD single. The band continued to make unexpected choices when selecting songs to cover, adding a version of Blondie's "In The Flesh" to the "I Say Nothing" 12"/CD single. Subsequent singles from the album included "Man In The Moon" in the UK and "Don't Call Me Baby" in the US.

The following year saw the release of an EP of four songs recorded live in the studio for the BBC, including yet another intriguing cover, the CS Angels' "Independence Day." This EP would be the only new material the group would release until Spring of 1991. As it turns out, it was well worth the wait.

Brushing aside any concerns about a "sophomore slump," Honey Lingers was a rare achievement, an album in which virtually any song could have been a single. (It also boasts one of the most covertly sexy titles in recording history.) From the delightfully infectious "Monsters And Angels" to the introspective "Perfect Place," the beautiful melodies, harmonies, and production of the album are immediately apparent. Repeated listening also reveals complex lyrics, which, in contrast to their sweet sound, are at times quite biting. 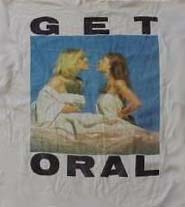 The last single from Honey Lingers was "Perfect Place," a mediation on altruism. Despite this kind outlook, the coming years would hold many difficulties for the band. Tracey and Melissa both faced the end of long-term relationships, the death of close friends, the loss of band members, and end of their association with London Records.

Despite the series of misfortunes the band was enduring, they managed to contribute a version of the Rolling Stones' "Gimme Shelter" to a 1993 EMI collection of covers of the song, collaborating with Jimmy Sommerville of the Bronski Beat and Communards.

Woody's intermittent participation in Madness complicated the Beehive's recording and touring activites, and the demands of supporting a family reportedly motivated Martin Brett's departure from the band. Guitarist Mike Jones was interested in pursuing a different musical direction than Melissa and Tracey.

The sisters returned to California in 1995. In an effort to exorcise some of the demons from their recent travails, work began on what would become their third album, Sex & Misery (which began life with the cheery working title Disastrous Relationships, Disillusionment, Depression & Death). Tracey and Melissa's manager had heard Peter Vettese's production work on Annie Lennox's Diva album, and suggested him for the new album. Vettese quickly became an integral member of the band, playing keyboards and co-writing many of the songs.

In a departure from their previous guitar-based songwriting method, many of the new songs were begun on keyboards with Vettese, with Tracey then adding lyrics and Melissa adding harmonies. During this time Tracey also had the opportunity to work with XTC's Andy Partridge, co-writing "Blue In Paradise" in a single afternoon, described by Tracey as "the best day of my career." Also included is Tracey's collaboration with early supporter Zodiac Mindwarp on "Love Locked Inside."

The first single from the album, 1995's "Angel Come Down," marked a departure from the traditional Beehive sound - which was the whole point. While the band hoped that taking a chance with a new sound would be appreciated by listeners, the move ultimately led to confusion. Fans hoping for a more traditional Beehive sound wouldn't have long to wait. Sex & Misery was released in April, 1996, featuring the singles "Scary Kisses," "Heavenly," and "So Hard."

At long last, Polygram finally released The Best of Voice of the Beehive collection in 1999, although most fans already had the songs on the collection.

In 2003 the Beehive self-released a CD with a treasure trove of rare material, appropriately titled Bee-Sides. It included demo versions of "Cupid" ("I'm Shooting Cupid") "Playing House," "Only If You Want To," "Heavenly," "Waitress," and "Perfect Place," as well as the tracks "Stupid Boy," "Doriah," "Shine Away," "Modern Heart," "Baby Don't Stay," and "Pocket Sized."

The Beehive shocked and delighted long-time fans by re-forming for a short tour of the UK in December of 2003, with The Wonder Stuff. A DVD of the live performances, Don't Call Me Baby, was released by Secret Records, including footage from the The Manchester Apollo and N.I.A. Birmingham shows. A CD of the shows, Don't Call Me Baby - Live, was released by Dreamcatcher in 2008.

Encouraged by their success, Mike Jones and Martin Brett were interested in further touring in 2009. Melissa and Tracey were unavailable due to family commitments in California, but gave permission for the proposed alternative, a one-off tribute gig. Instead Jones and Brett formed a band, called "Spirit of the Beehive," with two female stand-ins modeled after Tracey and Melissa, causing a rift which may prevent the true band from ever reforming.

Regardless of what happens with the Beehive, Melissa and Tracey have forged ahead to develop careers and family lives they are happy with.